John Horniman was a grocer who established a family business as a tea merchant in 1826. Horniman & Co started in a small way, initially trading from humble premises in Newport, Isle of Wight, for several years, while Horniman concentrated on his grocery business.

This state of affairs changed dramatically in the 1840's when Horniman initiated the production of pre-packaged tea. Horniman & Co was the first company of its type to begin selling tea in sealed packets. Pre-packaged tea was revolutionary, as prior to this time tea had been sold only loose.

By 1860 trade was booming and the company established a warehouse in London. Horniman, a Quaker, used to ride to the warehouse on a black horse in full Quaker costume.

As John Horniman approached retirement he decided to pass the business on to his sons, William Henry and Frederick John. Subsequently in 1889, the company name was changed to W.H. & F.J. Horniman & Co Ltd., although only Frederick was to have an active future role in the firm. In 1891 Hornimans was said to be the biggest tea company in the world. 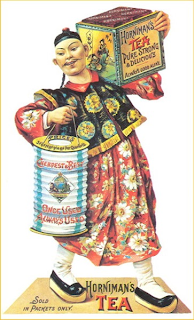 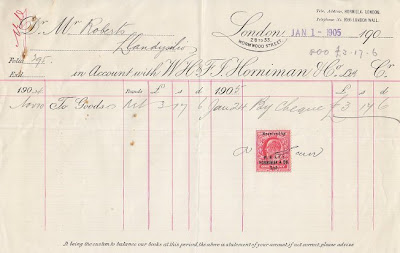 With the firm taking its new name in 1889 and being sold in 1918, the Horniman pattern appears on relatively few issues. Oddly, J. Lyons had a long period of use but I am aware of their overprint only on Queen Elizabeth Wilding issues.
Posted by Michael Behm at 5:21 AM