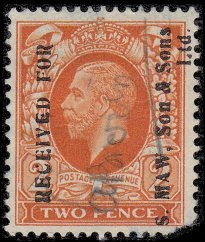 In 1814 George Maw, a former Lincolnshire farmer, purchased a surgical plaster factory at Whitecross Street in London. The factory soon began to manufacture surgical instruments and later expanded to produce a variety of medical and pharmaceutical products.

George Maw's son, John, was made partner in the business in 1826 and the company took the name George Maw and Son. George retired in 1828 and his second son, Solomon, joined his brother in partnership.

Ill health forced John to retire in 1835, but under the stewardship of Solomon the business flourished and expanded rapidly.

The company moved to larger premises at Aldersgate Street, although the factory had to be completely rebuilt following a fire in 1856. In 1860 Solomon Maw's son, Charles, was taken into partnership and the firm was renamed S. Maw & Son. In 1901 the firm was incorporated as a limited liability company with the name S. Maw, Son & Sons Ltd. 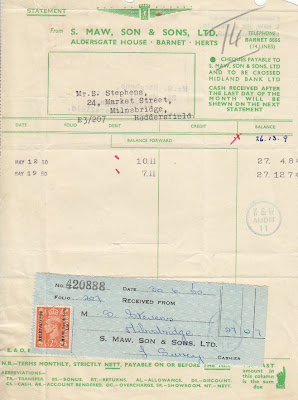 Due to lack of space for further expansion, the company purchased a 22 acre estate in Barnet in 1920, and moved a large part of its manufacturing operations there. In 1973 S. Maw, Son & Sons Ltd. was acquired by the American company, International Telephone & Telegraph Corporation Inc. despite this company having no links at all with the pharmaceutical industry.

Maw used a variety of perfin patterns during the 20th Century, but I am not aware of any use on stamps from the Victorian Era.
Posted by Michael Behm at 3:21 PM