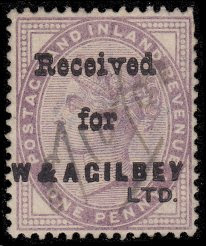 In 1857, two brothers by the name of Walter and Albert Gilbey, established a company as retail wine merchants. Their premises was a basement in London's Oxford Street. The brothers began by importing and selling wine from South Africa as it attracted less import duty than European wines.

In the 19th Century wine merchants typically supplied wine in cases of a dozen bottles. Their customers tended to be the aristocracy as only they could afford it. W & A Gilbey revolutionised the way wine was sold. They sold wine by the bottle to the general public, and within months had over 20,000 customers.

As the company continued to prosper, it moved to larger premises in Camden Town in 1869, where a gin distillery was also built. The Gilbeys also branched out into whiskey, taking over two distilleries in Scotland in the 1880s.

In 1893 the firm became a limited company with the trading name of W & A Gilbey Ltd. Two years later the company began to market its own gin. “Gilbey's Gin“ soon became a household name. 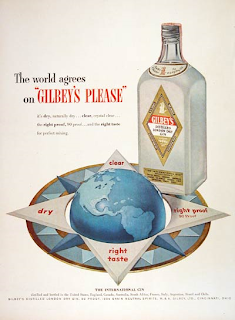 1953 Advertisement
In 1963 W & A Gilbey Ltd. moved to Harlow in Essex where a large distillery was built, producing the now world famous gin. However the company went into financial decline from the mid 1960s and it was taken over by Grand Metropolitan in 1972. Grand Metropolitan merged with Guiness plc in 1997 to form Diageo, which is currently the world's largest producer of spirits and a major producer of beer and wine. 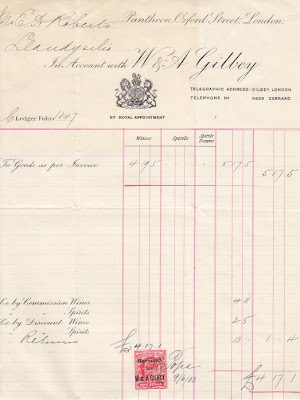 Gilbey used commercial overprints on revenue and postage stamps until at least the 1940s. The range of issues and variety of patterns make for an interesting collection.
Posted by Michael Behm at 7:26 AM