Peek Frean and Co. was the first mass producer of biscuits. The company was established by James Peek and George Frean in Dockhead, London in 1857. A new factory was built in nearby Bermondsey nine years later. It provided Bermondsey with a major source of employment and gave the area the nickname "Biscuit Town".

The Franco-Prussian War of 1870 brought Peek Frean and Co to prominence, when 10 million fine navy biscuits were ordered for the troops. Around this time the old factory in Dockhead burned down. The sight was so spectacular that the Prince of Wales (later King Edward VII) went there on a fire engine to see it. 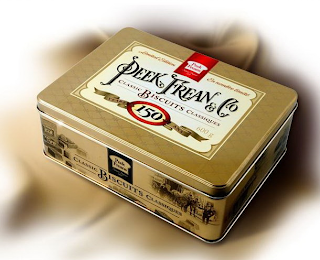 The most famous biscuits to be invented By Peek Frean were the Garibaldi (1861), the Bourbon (1910), and the first-ever chocolate coated biscuit called Chocolate Table.

In 1901 Peek Frean and Co. became a limited company and decided to expand the confectionery side of their business. In 1913 a new factory was built in Bedford which became Meltis Limited, operating as a subsidiary of Peek Freans. Meltis produced peppermints, crystallized fruits and chocolate liqueurs. Meltis also formed an alliance with Suchard Chocolate Limited which was to last for more than 50 years.

In 1921 Peek Frean and Co. Ltd. merged with rival firm Huntley and Palmers to form Associated Biscuit Manufacturers Ltd, though both companies retained their own brands and premises. The new company was acquired by Nabisco in 1982, who closed down the Bermondsey factory in 1989. 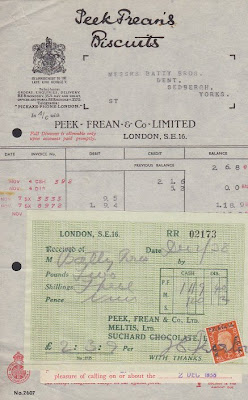 By Mark Matlach
Posted by Michael Behm at 5:44 PM