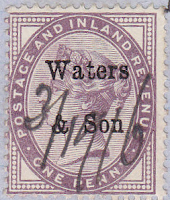 Waters and Son was a London company best known for making quinine wine.

Quinine wine was made by adding quinine hydrochloride to orange wine, which was prepared by fermenting a sugary solution containing fresh bitter orange peel.

In Victorian Britain it was popular to drink quinine wine as a remedy for indigestion, nervous disorders and appetite loss. A glassful a day was recommended by manufacturers as a "restorative to the weak".

Waters and Son exported much of their product to British colonies where it was drunk as a preventative for malaria. 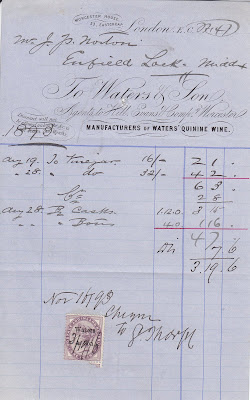 By Mark Matlach
There are at least two major Waters overprints: one with an italic font and another with a normal font. In overprints of the latter style there can be small differences in the shape of the ampersand.