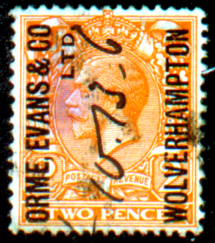 In 1864, brothers Alfred and Thomas Orme established a japanning and enameling company in Wolverhampton, trading under the name of Orme Brothers. At this time japanning was a very popular lacquering technique which was meant to imitate the lacquer traditionally produced in Japan.

In 1878 Bernard Evans joined the company and the name changed to Orme, Evans & Co. The business became a limited company in 1899. At the turn of the century, Orme, Evans & Co. Ltd was well-established and making a wide range of goods in a wide range of materials and finishes. By 1914 the firm was also producing radiators and motor parts and had a total workforce of 800. 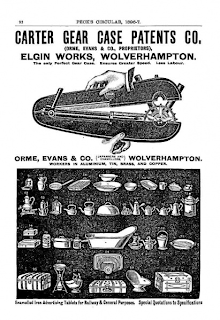 Orme, Evans & Co. Ltd. was acquired by the Brockhouse Group sometime during the Second World War. It seems that the company continued, with its own identity maintained, within the organization. Exactly why and when Orme, Evans & Co. Ltd. stopped trading or, at least, lost its separate identity, is not known.

By Mark Matlach
Posted by Michael Behm at 3:20 PM