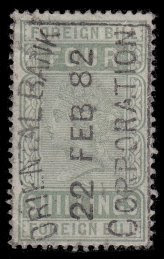 The Oriental Bank Corporation was a bank in India in the 19th Century. It was also the first bank in Hong Kong and the the first bank to issue banknotes there.

In the 1860s the bank held a dominant position in India and China. However, its finances suffered greatly due to the coffee disease in Ceylon which devastated the coffee plantations in the area, in which the company had invested heavily. In 1884 the bank ran into severe difficulties and was reconstituted as the New Oriental Bank Corporation. With growing competition from its rivals, the Hong Kong and Shanghai Banking Corporation and Standard Chartered Bank, the New Oriental Bank Corporation failed to survive and closed down in 1892.

by Mark Matlach
Posted by Michael Behm at 3:03 AM