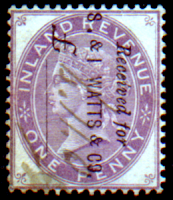 S. J. Watts & Co. was a wholesale drapery business established by brothers Samuel and James Watts in Manchester. Between 1851 and 1856 the company built a huge warehouse in the center of town.

The warehouse was more like a department store on the inside. 600 staff looked after finished goods:
During the Second World War, the Watts' warehouse was bombed in the Manchester Blitz, but was saved from destruction when the fire was smothered by textiles after the water supply had failed. 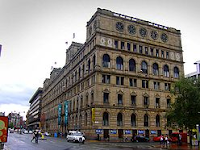 Watts Warehouse Manchester
S. & J. Watts & Co traded until 1960 when the company merged with a rival firm to become Cook & Watts, which was taken over by the Courtaulds Group in 1969. The Watts warehouse is now a Grade II listed building and since 1982 has been the Britannia Hotel. 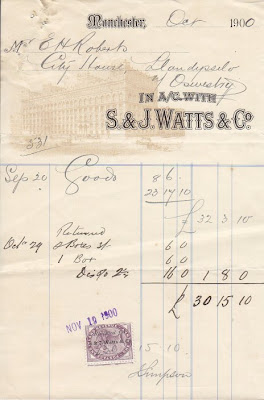 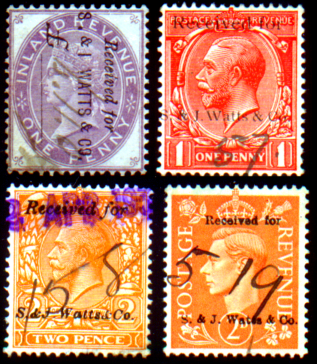 S. & J. Watts had a rich history of using commercial overprints, with at least five different patterns being known (the four immediately above and the example on the receipt). The last issue I am aware of is SG 518.
Posted by Michael Behm at 3:44 AM