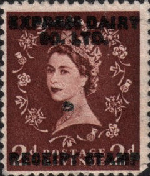 The Express Country Milk Supply Company was established in London in 1864 by George Barham, and in 1892 it became the Express Dairy Company Limited. The company transported milk into London by rail, and delivered it direct to people’s homes.

The Dairy Supply Company was formed as a separate company selling dairy equipment such as the milk churn, which was invented by Barham.

The firm also ran Express teashops, cafes and bakery and became a limited company in 1937. In 1969 Express became part of Grand Metropolitan and in 1992 part of Northern Foods. In 1998 the name of Express Dairies Plc returned, with the division of Northern Foods into two sections.