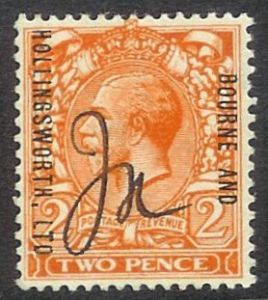 This is the story of Howard Hollingsworth of London, England. Howard’s father, Charles, a successful bacon curer from Bilston, Staffs, ensured Howard (born 1871) received a good education – first in Edgbaston, then at college in Taunton, Somerset.

Starting out as apprentice in a drapery store, he was ill-used by the management, was served bad food and forced to live in a rat-infested basement. He soon moved to London where he met Walter W Bourne, son of a farmer, who worked as a buyer for the well-known Pontings store. They became very close friends and with £600 capital, borrowed from relatives, set up the first Bourne & Hollingsworth store in Westbourne Grove.

The business thrived, moving into larger premises. In 1902 they were able to purchase a much bigger store at 116–18 Oxford Street. From then until 1908 business really took off and they gradually purchased and rebuilt the entire block acquiring in the process a brothel, a ‘nest of Polish tailors’ and Savory’s cigarette factory. By 1925 it offered the best quality fashion goods, served by smart, well-trained staff within a very spacious and stylish 320,000 sq ft store (designed by Slater and Moberly), whose name was advertised nationwide.

Walter Bourne had died in 1921, aged 56, but two of his three sons joined the business as directors. Howard, who never married, encouraged and supported them and the store continued to lead the field. Escalators and lifts were installed, a dining room and rest area, and floorwalkers ensured customers received excellent service. Howard, perhaps remembering his own introduction to work, made sure the B&H employees had the best conditions.

His unique Staffordshire House company hostel was sold in 1911 and its successor, the larger Warwickshire House, provided good meals and rooms for up to 600 female staff close to the store. Another innovation was producing own-brand labeled goods in a company factory behind the store.

The store closed its doors for the last time in 1983.

By Paul Green
Posted by Michael Behm at 6:04 AM