Derry & Toms was a large London department store, the company dates back to the 1860s, when Joseph Toms, a store proprietor joined forces with his brother-in-law, Charles Derry. In 1920, the John Baker Company acquired the "Derry & Toms" company.

In 1932, the store moved to a new large seven story building on Kensington High Street, the building was designed in an Art Deco style popular at the time by Bernard George and featured metalwork by Walter Gilbert, the store's building is most famous for its Kensington Roof Gardens, which were laid out between 1936 and 1938 by Ralph Hancock, a landscape architect, on the instructions of Trevor Bowen (then vice-president of Barkers, the Kensington department store giant that owned the site and constructed the building in 1932). The Gardens has been listed as a Grade II site by the English Heritage in 1978.

The company closed in 1973, and the building was bought by Biba, which remained there for only a few years. The location is now a Marks and Spencer’s. 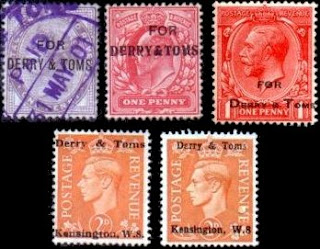 Derry & Toms had used commercial overprints at least as early as 1901.

By Paul Green
Posted by Michael Behm at 8:33 AM