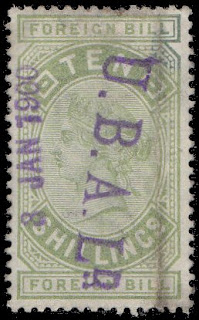 In 1837 a struggling Australian bank called the Tamar Bank, went to London in search of capital and managed to find a group of investors who were prepared to support a bank in Australia. They founded the Union Bank of Australia, which took over the Tamar Bank and opened for business the same year. The new bank hoped to capitalise on Australia's potential to meet the large demand for wool by English textile mills.

In 1838 the New Zealand Company approached the Union Bank of Australia about opening a branch in the firm's new settlement. The Union Bank agreed and became the first bank to do business in New Zealand.

Between 1838 and 1841 the Australian sheep-farming boom reached new heights. During this period the Union Bank consolidated its position and built up business secure enough to withstand the severe depression that began in late 1841. By 1900 the Union Bank enjoyed relative strength and prestige throughout the Australian Commonwealth.

By Mark Matlach
Posted by Michael Behm at 6:44 PM