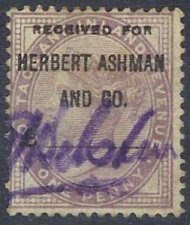 In a trade directory of the late 19th century, Herbert Ashman and Company Limited were listed as curriers, leather merchants and leather belting and hose manufacturers. Ashman's family arrived in Bristol from Yeovil when he was a few months old. He joined his father's firm at the age of 15, and founded his own business with his brother seven years later, in 1876.

Although his name still stands engraved in the stonework high above 1-5 Broadmead street, Herbert Ashman's greater claim to fame is that he was created the first Lord Mayor of Bristol in June 1899. Before this time the office was simply that of Mayor. On 15th November of the same year he became Sir Herbert, when he was knighted by Queen Victoria during her visit to the city. This was the last personal conferment of knighthood by the Queen, who died in 1901. Herbert Ashman died in September 1914 following an operation for appendicitis. 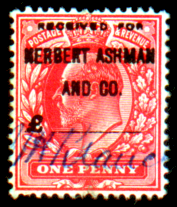 The company used commercial overprints at least into the early 1900s.
Posted by Michael Behm at 9:08 AM