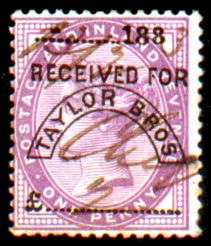 Taylor Brothers Limited was a cocoa and chocolate manufacturer based at Brick Lane in the East End of London, where the company had a Mustard and Cocoa Mill. Taylor Brothers claimed to be "the largest manufacturer of cocoa in Europe" around 1880, so it is rather surprising that information about this company is elusive.

Taylor Brothers' most successful product appears to have been Maravilla Cocoa, which was sold in tin-lined packets by grocers nationwide in the last quarter of the 19th Century. The company also made Taylor Brothers' Original Homeopathic Cocoa and Soluble Chocolate as well as Challenge Mustard, which was "celebrated for its pungency and purity of its flavour." 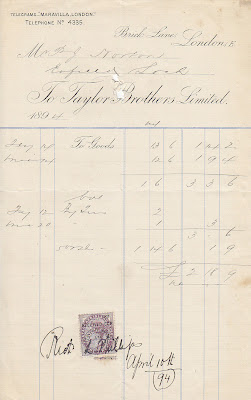 By Mark Matlach
There are at least two varieties of commercial overprints for Taylor Brothers. The sample at the top of this post has the date .....188 while the receipt has .....189. The sample also has a "3" written at the end of the date, so we know that Taylor Brothers used commercial overprints for at least 11 years.
Posted by Michael Behm at 5:43 AM