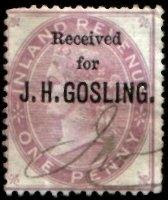 In October 1795, Mr. J. H. Gosling founded a drapery store at 80 George Street, Richmond, London. J. H. Gosling's sons and grandsons succeeded him in the business throughout the 19th century. The last links with the founder's family ended with the deaths of Matthew Gosling and Herbert Gosling at the end of the 19th century. The manager at the time was Arthur Snow and his son, Ernest Snow, succeeded him at the store.

By Paul Green
Posted by Michael Behm at 9:52 AM