During the 1850s the first commercially successful sewing machines went into mass production in the United States. It did not take long for entrepreneurs in Britain to seize the opportunity to cash in on the new invention.

One such entrepreneur was an engineer by the name of William Jones. Jones established a factory in Audenshaw, Manchester in 1859 and began manufacturing his own sewing machines. A year later Jones formed a partnership with Thomas Chadwick. Trading as Chadwick & Jones they manufactured sewing machines at Ashton-under-Lyne. The partnership was short lived and Chadwick left the company in 1864.

William Jones opened a new factory in Guide Bridge, Manchester in 1869. Business took off when Jones managed to get a large contract for Burtons the tailors to supply heavy-duty industrial machines to some of their factories.

The company went public in 1879 with the trading name of Jones Sewing Machine Co. Ltd. The firm was now producing a variety of sewing machines for both domestic and industrial use and was the best known sewing machine manufacturer in Britain.

The Jones Family Machine, which was produced in the 1880s
Jones Sewing Machine Co. Ltd. continued trading until 1968 when it was taken over by Brother Industries (UK) Limited, who continue manufacturing sewing machines to this day. 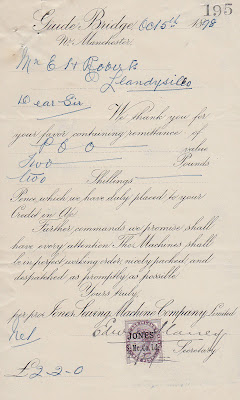 By Mark Matlach
Posted by Michael Behm at 8:07 AM