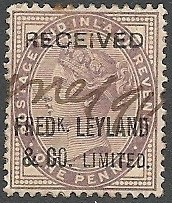 Frederick Leyland was a partner in the firm of Bibby Bros and started up his own company in 1873 when 21 of Bibby Bros ships were transferred to the newly formed company. Services to Boston started in 1876.

With the death of Frederick Leyland in 1892, a new company Frederick Leyland & Co Ltd was formed and began a close association between Leyland and Furness Lines. Passenger services began in 1895, and in 1896 the founding of Wilson's & Furness-Leyland Line took place to run North Atlantic services.

In 1899 the West India & Pacific SS Co was taken over and ran a service from the UK to Caribbean and Gulf of Mexico ports. A Liverpool to New York service was inaugurated in 1901 and joint services to the Mediterranean were operated with G. Papayanni, Liverpool.

In 1902 the company came under the control of International Mercantile Marine Co which also took over American Line, Atlantic Transport, Dominion, Red Star and White Star Lines. A rationalization of services followed this take over and Leyland withdrew from the Mediterranean and transferred many ships to Ellerman Lines, and later withdrew from the New York service.

The years following WWI saw many transfers between IMMC group companies and in 1927 Leyland's two remaining passenger ships went to Red Star Line. The economic depression of the 1930s caused the sale of many ships, and by 1935 Leyland's last ship was sold and the company ceased to exist.

By Paul Green
Posted by Michael Behm at 6:36 AM