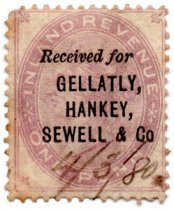 Gellatly, Hankey, Sewell & Co. was a shipping company that was established by Edward Gellatly at 109 Leadenhall Street, London, in 1862. The company operated for a hundred years, closing in 1962.

Unfortunately, the records of the early history of Gellatly, Hankey, Sewell & Co. were burnt in a fire in the company offices; however, in 1862 the firm purchased a sailing ship called the Edwin Fox for the sum of £7600. The ship's nickname became the "Tea-tub", probably due to connection with the tea trade coupled with the fact that she was "tubby" in shape, as against the slimness of her contemporaries. The ship sailed the trade routes to Bombay, Calicut, & Cochin in India, returning with cargos of Calico linen, ginger, pepper, and other spices. Gellatlys sold the Edwin Fox in 1873. The ship was later used to transport emigrants from Britain to New Zealand. The Edwin Fox made four such voyages (which lasted 4 – 6 months) to the distant new colony. 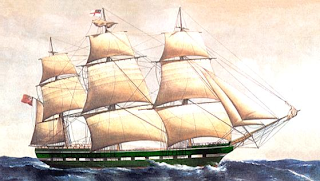 The Edwin Fox, built in 1853
In 1884 Gellatly, Hankey, Sewell & Co. bought a steamship called the SS Bengal. Only a year later the ship was wrecked off Milton Reef near Java, when on passage from Saigon to Sourabaya with a cargo of rice.

by Mark Matlach
Posted by Michael Behm at 12:14 PM