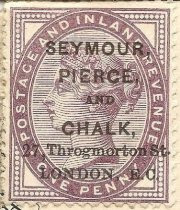 NOTICE is hereby given, that the Partnership heretofore subsisting between us the undersigned, Charles Alexander Pierce and Arthur Chalk, carrying on business as Stockbrokers, at 27, Throgmorton-street, in the city of London, under the style or firm of “Seymour, Pierce, and Chalk," has been dissolved by mutual consent as and from the 25th day of March, 1901. All debts due to and owing by the said late firm will be received and paid by the said Charles Alexander Pierce.