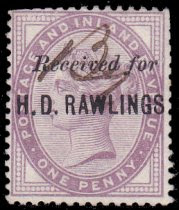 H. D. Rawlings was a carbonated drinks manufacturer established by John Rawlings in London in 1784. The company made fruit juices, squashes, cordials, and carbonated water.

In the Victorian era, the entire Rawlings empire eventually came into the ownership of a rich widow named Sarah Rawlings. A young clerk by the name of Henry Doo was employed by Sarah. She became infatuated with him and proposed marriage, offering Henry full control of the business, provived that he changed his surname to Rawlings. Henry agreed and the couple were duly married. Henry took control of the company, which now became H. D. Rawlings.

In 1891 H. D. Rawlings was acquired by rival carbonated drinks producer, R. Whites, and is now part of the Britvic Group.

by Mark Matlach
Posted by Michael Behm at 5:39 AM