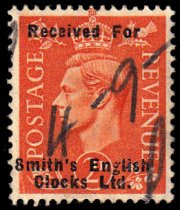 Smith English Clocks Ltd. was one of the most prolific clockmakers of the 20th century. The company was begun in 1931 when S. Smith & Sons Ltd. (a motor-parts manufacturing company) decided to enter the domestic clock market and formed a new company, Smiths English Clocks Ltd., with the main factory in Cricklewood, London.

Smiths was one of the first companies to produce synchronous electric clocks, which were put on the market in late 1931. In 1934, synchronous alarm clocks were manufactured. This was followed in 1935 by the "Synfinity", which Smiths described as "the clock that never stops". If the electric supply failed, the clock would run for up to six hours and rewind when the power returned.

During the Second World War, Smiths' production expanded. There was a demand for motor, aircraft, and marine instruments for the Services. Fuses for shells were also manufactured. At the end of the war, the Cricklewood factory returned to clock production. Another factory at Carfin, Glasgow, began producing alarm clocks that sold for less than £1. A new factory for the manufacture of alarm clocks was opened at Wishaw in Scotland in 1951 as Carfin was not able to keep up with demand. 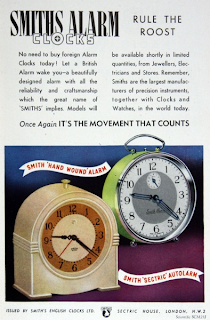 Advertisement, 1947
In c1955 Smiths English Clocks Ltd. changed its name to Smiths Clocks and Watches Ltd. The latter half of the 1970s saw the decline of clock and watch manufacturing by all European and British companies as they were unable to compete with lower cost products offered by manufacturers in the Far East. In 1977 Smiths Clocks and Watches Ltd. ceased trading.

by Mark Matlach
Posted by Michael Behm at 5:27 AM