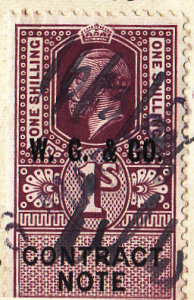 Walpole Greenwell was also a keen agriculturist, a prominent breeder of pedigree stock (particularly Shorthorn cattle and Shire horses, for which he was awarded numerous championships), and was President of the Royal Shire Horse Society. His Shire stud was considered the finest in the country. Walpole was created 1st Baronet Greenwell, of Marden Park, Godstone, Surrey on 19th July 1906. Sir Walpole Greenwell died in 1919 at the age of 72. 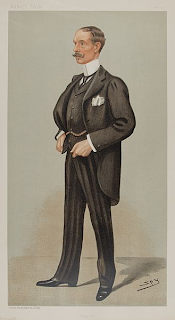 Caricature of Walpole Greenwell published in Vanity Fair in 1898
W. Greenwell & Co. was acquired by Midland Bank in 1987. Following the HSBC takeover of Midland Bank in 1992, the company became HSBC Greenwell, which would become the largest treasury trading operation in Europe. 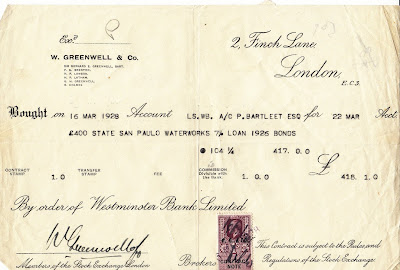 by Mark Matlach
Posted by Michael Behm at 11:56 AM