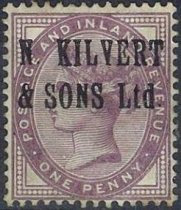 Nicholas Kilvert (Senior) was born in Over in Cheshire in 1822, the eldest son of Thomas Kilvert, and was the founder of N. Kilvert & Sons in Trafford Park, manufacturers of Kilvert's Lard, the world-famous brand of cooking fat. Kilvert lived at Ashton Lodge in Ashton on Mersey.

The origins of the family business had, in fact, begun earlier when Nicholas' father, Thomas Kilvert, (1799-1871), is recorded as having moved with his wife Sarah (Vernon) to Manchester in 1821 to set up a pork butcher shop at 13 New Market, Salford, and another later in Chorlton. He lived at White Cross Bank in Chapel Street, Salford.

One of Nicholas Senior's four sons, another Nicholas, (1859-1922), lived in Brooklands in south Manchester and became Managing Director of the company on the death of his father. This Nicholas went on to become a Manchester City Councillor for a time.

When he died, his younger son, Harry Vernon Kilvert, (born 1862) took up residence at Ashton Lodge. He too became Managing Director of the company on the death of his brother Nicholas (Junior). Harry Vernon was an important figure in local politics and was chair of Altrincham Conservative Association. He was Knighted by Queen Victoria for services to Business and the Community, and his wife, Annie, had a scout troop named in her honour - "The Lady Kilvert's Own Scout Group".

By Paul Green
Posted by Michael Behm at 7:51 AM