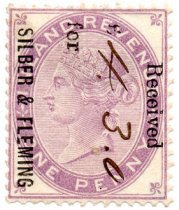 Silber & Fleming were manufacturers and wholesalers of a vast range of products from ceramics and glass to furniture and silverware. The company was founded c1854 by Albert Silber, an immigrant from Germany, who, together with his partner Mr. Fleming, established a wholesale fancy goods business in Cheapside, London.

For a short period in 1868, Albert Silber was confined to his bed by illness. Wishing to see the time at night, he invented a little contrivance that soon became extremely popular. This was a stand to carry a nightlight within a glass globe, on which the hours were marked in bold figures. Silber experimented with the common Argand burner and found that it could be much improved by the introduction of an inner tube, which supplied a better current of air to the interior of the flame. This was the general principle underlying the "Silber" burner, and it was modified to suit illuminants of every description. In c1870 Silber produced a lantern for an Argand burner that was subsequently used for the purposes of naval or military signalling. Silber's last achievement was the production of a series of railway lamps, both for the lighting of carriages and for signalling.

In 1882 the premises of Silber & Fleming were completeley destroyed by a fire, but within two years a huge new replacement warehouse was built on the same site.

In 1886 Mr. Fleming retired. Albert Silber was left as sole proprietor and he converted the business into a private limited company. Silber died from smallpox later the same year and subsequently the fortunes of the company declined dramatically. In 1898 the firm was acquired by Faudel Phillips & Son.

by Mark Matlach
Posted by Michael Behm at 5:31 AM