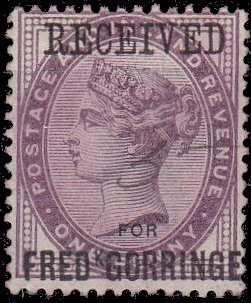 Frederick Gorringe was a silk mercer and draper who founded Gorringe's department store.

In 1858 Frederick Gorringe opened a small drapery shop in Buckingham Palace Road, London. The shop soon became popular with the nobility and gentry and was patronized by the Ladies of Queen Victoria's household. Gorringe's business prospered and by 1869 occupied three shop premises, which were eventually replaced by a large department store. 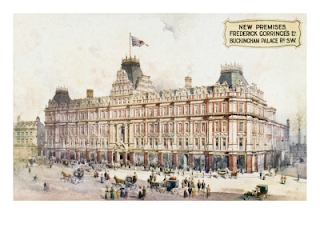 There were tiny rooms at the top of the store where unmarried sales assistants lived. Gorringes had a strict dress code for its sales staff: women wore black dresses and men pin-striped suits. Sitting down behind the counter was not permitted. The customer was always right and politeness was the byword--a complaint from a customer would often lead to an instant dismissal.

Gorringes remained a well-known, fashionable department store until its closure in 1968.

By Mark Matlach
The Gorringe overprints of the Victorian era have noticeable variations in the spacing and positioning of the words in the pattern.