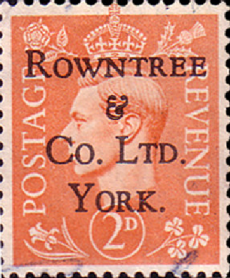 Joseph Rowntree was born on May 24th 1836 at his father's shop in Pavement, in the centre of York. He was the second of five children: his older brother being John and the other siblings, Henry Isaac, Hannah and Sarah Jane. His parents held strong Quaker beliefs, as had several generations of his family.
England, at this time was still a place where only one man in six had the vote and two thirds of the population worked in the countryside. Farmers and their families used to come into the market centre of York, known as the Pavement, to sell their animals and produce and to stock up with groceries.

The Rowntree's shop was central to this trade and Joseph was apprenticed to his father at the age of fifteen. This was to provide Joseph with the basic business acumen, which served him well in his career that was to last for the next 71 years.

After a brief period in London when he was 21, to broaden his grocery experience, he returned to the Pavement and became a partner in his father's business. He married but his first wife died due to poor health, leaving one daughter. His second marriage produced five children.

In 1868 he joined his brother Henry Isaac who then owned a cocoa,chocolate and chicory works at Tanner's Moat near the river Ouse. The business developed slowly until in 1879 a Frenchman, Claude Gachet, introduced French gums to Joseph and Henry and in 1881 'crystallised gum pastilles' were sold by Rowntree's. In 1883 twice as many people were employed as in 1881, largely due to the introduction and popularity of these gums. Henry Isaac died in 1883 leaving Joseph alone in developing the business. This he did with a move to a larger specially built factory at Haxby Road. In 1897 Rowntree & Co became Limited, with Joseph Rowntree as Chairman. When Joseph retired in 1923 he had seen his company grow from a staff of 12 to over 7,000 in the space of 55 years.

From the outset of his career he had always adopted a democratic attitude with his workforce and was always aware of their welfare. He introduced pensions, clubs, as well as profit sharing, which helped to develop a warm and close relationship with his employees. In 1918 he introduced an annual week's holiday with full pay. At the time of his death in 1925 the company was established as one of the major manufacturing forces in England and the foundation for greater success was set.

Rowntree’s was synonymous with Jelly and many of the ten flavours used in 1923 are still in use today. The popularity of Rowntree's jelly has not waned but increased and in 1983 thirteen times the amount manufactured in 1923 was produced.

By Paul Green
Posted by Michael Behm at 5:46 PM