Henry Bannerman was a successful farmer in Perthshire, Scotland when at the age of 55 he decided on a complete change of career. In 1808 he moved with his family to Manchester, determined to get involved in the burgeoning Lancashire cotton industry. Within a month he had rented a warehouse and established a company with the name of Henry Bannerman & Sons. The new enterprise began trading in cotton, calicoes, muslins and plain fabrics.

Henry Bannerman died in 1823, his second career having lasted some 15 years. His eldest son David took over until his death six years later. The business was carried on by David's brothers, and after their retirement, by David's two sons.

Bannermans was by this time prospering and in the late 1830s the company moved to a huge warehouse in York Street which was right in the centre of the Manchester cotton trade. Bannermans also had four cotton mills in the Manchester area : Brunswick Mill in Ancoats, Old Hall Mill in Dukinfield and the North End Mill and River Meadow Mill, both in Stalybridge .

In 1880 Charles Macara became the manager of Bannermans. He concentrated the firm exclusively on “heavy” goods such as curtains, quilts, sheets, blankets and calicoes. Macara remained in charge until his death in 1929.

By this time the Lancashire cotton industry was dying. The First World War had halted the supply of raw cotton and the British Government had encouraged its colonies to build their own cotton mills. With the War over, Lancashire never regained its markets and the independent mills were struggling.

The Bank of England set up the Lancashire Cotton Corporation in 1929 in an attempt to save the industry and Bannermans' mills were taken over a few years later. The mills were acquired by Courtaulds in 1964 and all production ceased in 1967. 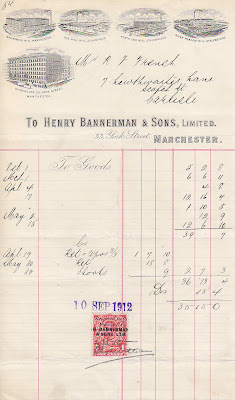 By Mark Matlach
Posted by Michael Behm at 12:27 PM