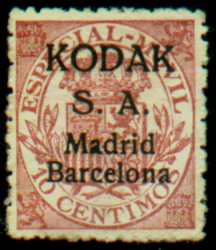 "The Royal Order of March 24, 1897, created a series of TIMBRE MOVIL ESPECIAL (special adhesive stamps (sometimes translated as "special handling" stamps)) whose denominations were 10 centimos, 5 centimos, 2 centimos and 1 centimo. The 10 centimos denomination was used on all duplicate and triplicate sheets of declarations of importation." The stamp you see here was issued in 1904.

The overprint identifies two cities where Kodak S.A. was located, which makes sense as the stamp was used in customs declarations.