In 1861, 16 year-old John Blundell Maple went to work at his father's small furniture shop in Tottenham Court Road in London's West End. The young man had exceptional business skills and was running the company within a few years. By the 1880s Maple & Co. had become the largest furniture store in the world selling everything required to furnish a house. The firm became a limited company with a capital of £2 million in 1890 with John Blundell Maple as Chairman.

Maple & Co. Ltd. manufactured their own luxury furniture in a warehouse so vast that in 1890 it occupied an area where once 200 houses had stood. The warehouse was regarded as one of the sights of London and was constantly visited by tourists.

Maple & Co Ltd. supplied furniture to everyone who was anyone in Victorian society. They furnished palaces all over the world, including Tsar Nicholas's Winter Palace, the Hofburg Imperial Palace in Vienna, all the great hotels, and town and country houses. Prestigious British embassies were all furnished by Maples.

The Maples furniture business continued for many years, until it went bankrupt in 1997 and was taken over by the retailer Allders.

By Mark Matlach
I am not aware of Maple overprints outside the range of stamps shown here. Despite the long history of the company, these overprints seem to be surprisingly scarce--which is unfortunate because the receipts are very interesting: 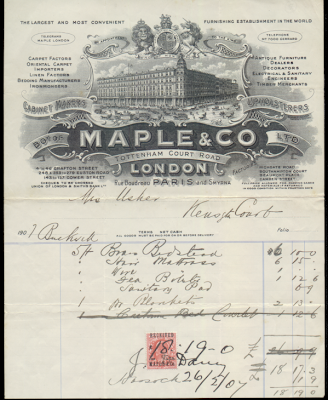