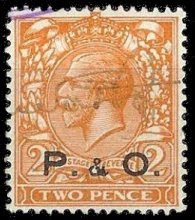 The Peninsular and Oriental Steam Navigation Company, which is usually known as P&O, is a British shipping and logistics company which dated from the early 19th century.

In 1822, Brodie McGhie Willcox, a London ship broker, and Arthur Anderson, a sailor from the Shetland Isles, northern Scotland, went into partnership to operate a shipping line, primarily operating routes between England and Spain and Portugal. In 1835, Dublin ship-owner Captain Richard Bourne joined the business, and the three men started a regular steamer service between London and Spain and Portugal--the Iberian Peninsula--using the name Peninsular Steam Navigation Company, with services to Vigo, Oporto, Lisbon and Cádiz.

The company flag colours are directly connected with the Peninsular flags: the white and blue represent the Portuguese flag in 1837, and the yellow and red the Spanish flag.

In 1837, the business won a contract from the British Admiralty to deliver mail to the Iberian Peninsula and in 1840 they acquired a contract to deliver mail to Alexandria in Egypt. The present company, the Peninsular and Oriental Steam Navigation Company, was incorporated in that year by a Royal Charter, and its name therefore includes neither "Plc" nor "Limited".

Mail contracts were the basis of P&O's prosperity until the Second World War, but the company also became a major commercial shipping line and passenger liner operator. In 1914, it took over the British India Steam Navigation Company, which was then the largest British shipping line, owning 131 steamers. In 1918, it gained a controlling interest in the Orient Line, its partner in the England- Australia mail route. Further acquisitions followed and the fleet reached a peak of almost 500 ships in the mid 1920s. In 1920, the company also established a bank, P&O Bank, that it sold in 1927.

Eighty-five of the company's ships were sunk in the First World War and 179 in the Second World War.

After 1945, the passenger market declined to India but boomed to Australia with the advent of paid-passages for literate & healthy European immigrants. P&O built 15 large passenger liners, including SS Himalaya, SS Chusan, SS Arcadia (1954), and SS Iberia (1954), culminating in SS Canberra, its last & largest in 1961. By 1968 over 1 million immigrants had arrived--many via P&O and Australia ended the program. P&O entered the cruise market and began to sell & scrap many of these liners. It concentrated mainly on cargo ships. It entered the tanker trade in 1959 and the roll-on roll-off (RORO) ferry business in the mid 1960s.

Over the last quarter of the Twentieth Century P&O diversified into construction management (through the Bovis companies, which it owned from 1974 to 1999), property investment and development, and a variety of service businesses including exhibition and conference centres, but most of these activities were disposed of following the company's decision in March 1999 to concentrate on maritime and transport. Its P&O Ports and P&O Cold Logistics divisions developed from P&O's operations in Australia, where it has a leading position in these fields.

On Sunday October 30, 2005 The Sunday Times reported that P&O was in takeover talks with Thunder FZE, a wholly owned subsidiary of Dubai Ports World, a company owned by the government of Dubai in the United Arab Emirates, in February 2006 shareholders voted in favour of the offer from Dubai. The combined group is the world's third largest ports operator.

Following its sale in March 2006 to Dubai Ports World for £3.9 billion, it became a subsidiary of DP World; however, the P&O brand has been retained. The company was headquartered in London, in the United Kingdom; it was listed on the London Stock Exchange and was a constituent of the FTSE 100 Index. 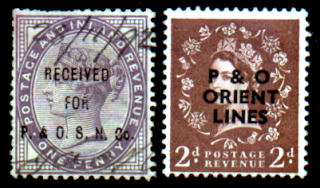 It is a little surprising that a company could use commercial overprints from the Victorian era through to the 1960s, and yet be rare through all of that time.
Posted by Michael Behm at 5:15 PM