John Pound & Co. was a manufacturer and retailer of high quality luggage and luxury dressing cases.

The business was originally started by John Pound's father, Henry Pound, who established the company in Leadenhall Street, London in 1823 with his partner Mr. Tasker. Pound & Tasker were makers of trunks and packing cases. Tasker died in 1857 and Henry Pound admitted his son into the business. John Pound took control of the company following his father's death and he developed the business into one of the largest of its kind in Britain. By 1871 John Pound & Co. had three factories, eight distributing warehouses, and five shops in central London; at Leadenhall Street, Regents Street, Oxford Street, Picadilly, and Tottenham Court Road. As well as luggage and dressing cases, John Pound & Co. also made and sold hunting bags, hat cases, writing cases and purses. 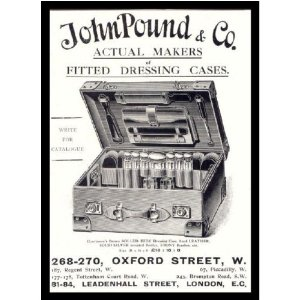 John Pound became Lord Mayor of London in 1904. With less time to run his business, he gave contol of the company to his two sons, John Lulham and Percy Albert. John Pound & Co. continued to trade until the 1940s or 1950s when it was taken over by John Lewis. 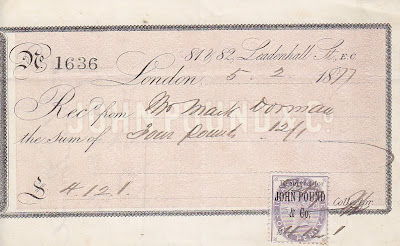 By Mark Matlach
Posted by Michael Behm at 5:05 AM