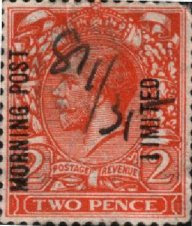 The Morning Post was founded by John Bell. Originally a Whig paper, it was purchased by Daniel Stuart in 1795, who made it into a moderate Tory organ. A number of well-known writers contributed, including Samuel Taylor Coleridge, James Mackintosh, and William Wordsworth. In the seven years of Stuart's proprietorship, the paper's circulation rose from 350 to over 4,000.

With the aid of Andrew Montagu, Peter Borthwick purchased the Post in 1876. His son Oliver was business manager and editor, but died young, and upon the father's death in 1908 control went to his daughter Lilias Borthwick wife of Seymour Henry Bathurst, 7th Earl Bathurst (1864-1943).

The paper was noted for its attentions to the activities of the powerful and wealthy, its interest in foreign affairs, and in literary and artistic events. It began regular printing of notices of plays, concerts, and operas in the early 20th century, and is said to have been the first daily paper in London to do this.

In 1881, it appointed the first woman war correspondent when it sent Lady Florence Dixie to South Africa to cover the First Boer War

A controversial campaign against Jewish control of the political echelons and the press in Britain led to a more and more successful boycott of advertising, so the newspaper gradually declined.

Eventually on August 24 1937, the Morning Post was sold to the competitor The Daily Telegraph.

You can see the acquisition of the Morning Post by The Daily Telegraph in the commercial overprints of the latter company. The newspaper company changed its overprint style between SG 465 and SG 488, then continued to use the later style until at least SG 573.
Posted by Michael Behm at 6:09 AM