Woodhams & Levy were brewers, salt merchants, corn dealers, and coal merchants based in Rochester, Kent. Goods for sale were transported in vessels up the River Thames to Liddard's Wharf in London twice a week to be traded. The company operated a brewery at Bulwark Hill for a short period from 1890 to 1895.

The Bulwark Hill Brewery changed hands several times during its relatively short history. The first definite mention of it is in the 1840 Pigot's Directory which states that Walker & Son were the brewers in this year. Sometime between 1844 and 1847 the brewery must have changed hands because from 1847 to 1882, Henry Cliffe is listed as the brewer. There then follows a quick change in ownership, J.A. Rolls is the brewer in 1889, but in 1890 Woodhams & Levy have taken over. Woodhams & Levy's control of the Bulwark Hill Brewery lasted for just five years as in 1895 the company was taken over by the East Kent Brewery. The East Kent Brewery did not stay long at Bulwark Hill, moving to new premises at Commercial Quay in 1905. In 1907 the site of the Bulwark Hill Brewery was occupied by the Piers Infant School. 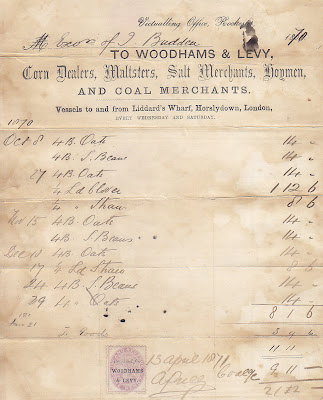 By Mark Matlach
Posted by Michael Behm at 12:18 PM