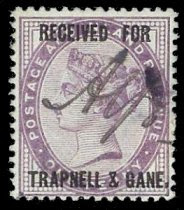 Trapnell and Co. was begun by Henry Trapnell in 1824 in Host Street. As it developed new premises were acquired in St.James's Barton, Queen's Street, St.Michael's and Barrs Street, St.Paul's.

In 1860 the headquarters of the business moved to College Green. By 1889 branches had opened in both Cardiff and Newport. A final expansion of the firm's manufacturing resources took place in 1903 when a five-floor factory was opened in Hill Street, Bristol.

During the 19th century, Henry Trapnell's sons William and Caleb helped build up the business. Philip Endres Gane, who had been employed since boyhood, was taken into partnership and at the end of the century took over proprietorship, the company becominga limited company Trapnel and Gane

In 1851 an imposing exhibit was designed and made by the firm's craftsmen for the Great Exhibition and in the following year there is record of a notable exhibit prepared for the Paris Exhibition. Royalty, too, were furnished direct in the 19th century and the furnishing of reception rooms for royal visits was often entrusted to the firm.

In 1909 a private limited company was formed of which Philip Endres Gane was chairman and managing director. His two sons, Leslie and Crofton, became associated with the firm as directors. The latter took over the chairmanship on the death of his father in 1933.

Air raids during the Second World War took a heavy toll of company premises. The large showrooms on College Green were totally destroyed in 1940 along with much furniture and many records. Shortly afterwards its workshop in St.Paul's and also its warehouse suffered the same fate.

The wartime destruction and other factors effectively ended the company's long-held reputation as a manufacturer of high-class house furnishings. In post war years the company operated from its showroom at 79 Park Street, Bristol. Unfortunately, these premises provided a totally inadequate single window display for its various departments. In 1950 the company's Newport branch closed (its Cardiff branch had already been sold in 1930) and four years later the company itself passed into voluntary liquidation.

By Paul Green
Posted by Michael Behm at 7:10 AM