Whilst working as a draper's assistant as a young man, William Whiteley dreamed of one day owning a grand shop which would sell everything. Whiteley lived frugally. He did not drink or smoke and survived on a diet of tea, bread and cheese. He managed to save £700 which was enough to open a draper's shop at Westbourne Grove, London in 1863. By 1867 Whiteley had acquired a row of shops along Westbourne Grove which he turned into 17 departments. Dressmaking was started in 1868, a house agency and a refreshment room opened in 1875, and a building and decorating department was added in 1876. Claiming that he could provide anything from a pin to an elephant, William Whiteley dubbed himself "The Universal Provider."

Whiteley met with strong opposition from smaller tradesmen and also from the local authorities over his grand business plans. Several fires in the 1880s may have been arson attacks by his opponents. Despite these setbacks business continued to prosper. By 1890 over 6000 staff were employed by Whiteleys, most of them living in company-owned dormitories, having to obey 176 rules and working from 7am to 11pm six days a week.

In 1897 another fire resulted in the Westbourne Grove store burning to the ground. William Whiteley was not to be defeated and in 1911 he opened a new store in nearby Queensway. This was claimed to be the largest British store in the world. Whiteley continued to work in his business and it was whilst in one of his shops that tragedy struck on 24th January 1907. A young man called Horace Rayner entered the premises and claimed to be Whiteley's illegitimate son. Considering him to be a blackmailer, Whiteley was about to call the police when Rayner shot him dead. Rayner received the death penalty though this was later commuted to life imprisonment.

Whiteleys department store closed down in 1981. In 1989, after extensive reconstruction, Whiteleys was re-opened as a shopping centre. 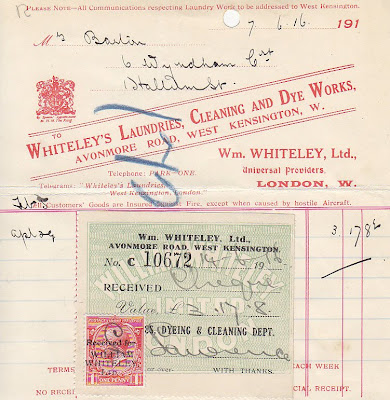 Whiteley Ltd. used commercial overprints for decades and you would think that they would be common. In a sense, they are--but there are many varieties of wording and font spread over quite a range of issues. Each combination of pattern and issue is a bit of a challenge to find: 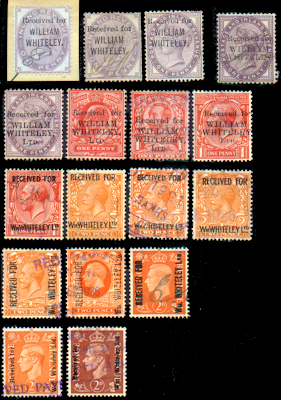