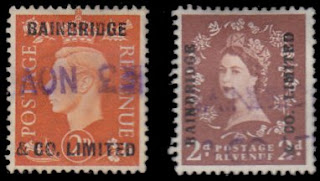 Emerson Bainbridge, together with his partner William Dunn, opened a drapers' shop in Market Street, Newcastle in 1838. From the beginning the two men stressed that all prices in the shop were fixed, which was a novelty at this time. They prided themselves on offering a wide assortment of products and good value for money. Sales were for cash only, and stocks were replenished by sea from London. Despite the success of the store, the partners fell out and Dunn left the business. In terms of retailing history, one of the most significant facts about Bainbridge's shop is that as early as 1849 weekly takings were recorded by department, making it one of the earliest of all department stores.

Emerson Bainbridge died in 1892 and control of the business passed to his sons. In 1897 the firm became a private, limited company.

In 1923 Bainbridge & Co. Limited opened a marble-lined food hall, which offered such delicacies as speciality sausages, galantines and haggis. There was also a thriving trade in unusual services such as the production of trade union banners.

In the 1930s the Depression in the North East of England caused business to suffer badly. During The Second World War part of the Bainbridge store was requisitioned. A large air-raid shelter was built and observation turrets on the roof provided lookout posts for air-raid wardens.

At the end of the war, George Bainbridge, who was the great-grandson of Emerson Bainbridge, was eager to revive the business and he set up the "Bainbridge Renaissance" project. However, financial resources were short and by 1952 it had become clear that if the business was to continue to expand, it needed to ally itself with a larger organisation and so an offer from the John Lewis Partnership was accepted. In 1953 Bainbridge formally joined the Partnership.

In 1976 Bainbridges was relocated to a new shopping centre in Eldon Square. In 2002 the Bainbridge name was finally dropped and the store became John Lewis, though many locals continue to call the store by its original name.

Bainbridge's retail operation used commercial overprints into the 1970s; their wholesale division used overprints at least in the early 1950s. If you look closely, you'll notice that the font used on the SG 488 overprint above is different from the one used on the SG 465 overprint at the top of this post.
Posted by Michael Behm at 1:10 PM