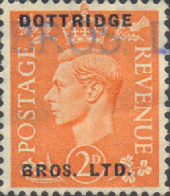 Dottridge Brothers was arguably the most important firm of funeral wholesalers from the mid nineteenth century to the 1950s. Supplying undertakers with coffins, handles, coffin trestles, wheel biers, embalming fluids and equipment, vehicles and many other accouterments, the firm occupied a crucial position meeting the needs of the numerous family funeral businesses operating throughout the UK.

Described as "Undertakers’ Manufacturers and Warehousemen", Dottridge’s advertisement from Kelly’s Post Office Directory published in 1890 gives an insight into the extensive array of services it supplied to the industry. Coffin, caskets, carriages, drapery, palls, plumes and brassware were some of the goods. Just before the turn of the twentieth century, monumental masonry, embalming and arrangements for cremation funerals would also be added to the list.

When a representative from the Undertakers Journal visited the newly rebuilt premises in 1913, it was noted that there were over 321 employees within the office and works as machinists, electroplaters, engravers, packers, warehousemen, coffin-makers, coffin-late makers, coach builders, engineers, show-room hands, drivers, chauffeurs, ostlers, etc. There were 115 – mostly black - horses in the stables and three motor hearses with a fourth under construction.

During 1983 the last Dottridge family member had withdrawn from the business, thus ending 150 years of family control. By this stage the firm had 200 employees and thirty funeral directing businesses located in north London, East Anglia, and the south east. 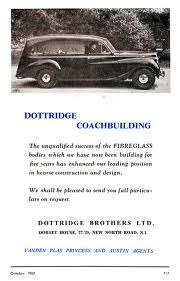 Following a management buy-out in 2002, this became Dignity Caring Funeral Service PLC. The last branch trading as Dottridge Bros was at Roman Road and this closed around 2000 thus bringing to an end over a century and a half of heritage.

By Paul Green
Posted by Michael Behm at 10:51 AM