Thomas Day began manufacturing animal medicines at Wantage, Oxfordshire, and Red Lion Street London, in 1834. In the same year he launched the first known equine tonic "Black Drink" at a price of 10 shillings for half a dozen bottles

In 1840, the business was incorporated as a limited liability company, Thomas Day Ltd. Thomas continued to develop his business, concentrating on the manufacturing of equine remedies for working horses across the country. In 1846 he closed down his London operation and concentrated the entire business in Wantage. Days son, William Henry Day, became a partner in 1852 after which the business traded as Day & Son Ltd. In 1856 the company re-established itself in London, with premises at 12 Sheldon Street, Paddington, although the Wantage site continued to be active. 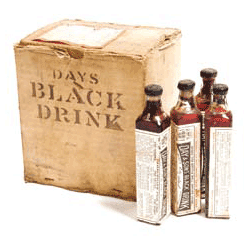 Shortly afterwards, George Fredrick Hewitt was taken into partnership and the company was renamed Day, Son & Hewitt Ltd. In 1862 it moved from Sheldon Street to 22 Dorset Street, London and during the 1880’s relocated to Hope Street Crewe, where it was renamed Day and Son (Crewe) Ltd.

Thereafter the business flourished, and was for a time the largest manufacturer of equine medicines in the country. During the 1920’s however, the demise of the working horse led to a corresponding decline in the company’s fortunes that continued until the 1950’s.

In the 1970’s Day and Son (Crewe) Ltd. relocated to purpose built premises in First Avenue, Western Road Crewe, and expanded its product range to include veterinary preparations aimed mainly at the large animal market. However by the early 1990’s the company was again in decline and in 1994 it was sold to its managing director Geoffrey Mclaughlan, who set about turning it around and increasing its product range. It continues to trade today as Day & Son (Crewe) Ltd.

By Paul Green
Posted by Michael Behm at 10:47 AM