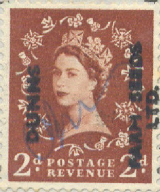 The firm's origins go back to 1832 when S. Dunn opened a seed and corn store in Gillingham, Dorset, subsequently being joined by his son James H. Dunn. In 1871 the latter assumed sole control, and was later joined by his son, Hammond Dunn.

The business, still specializing in agricultural seeds, moved to Bournemouth in 1890 and changed location again in 1918 with a move to Castle Street, Salisbury. In 1920, the limited company of Dunns Farm Seeds Ltd. came into being. Business thereafter grew steadily until, by 1934, Dunns farm seeds were available throughout southern England, the Midlands, and Wales. In addition, they developed a large grain business. In the following years Dunns expanded by buying other companies, including:
In 1966, Dunns Farms Seeds Ltd. was taken over by the Bath & Portland Group Ltd., and joined with Soil Fertility Ltd., of Corsham, Wiltshire to form Soil Fertility Dunns Ltd.

By Paul Green
Posted by Michael Behm at 10:39 AM