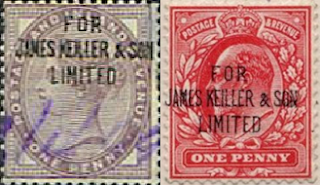 Keiller's marmalade, named after its creator Janet Keiller, is believed to have been the first commercial brand of marmalade, produced in Dundee, Scotland.

The apocryphal story tells that James Keiller bought a ship load of oranges from a ship which was seeking harbor from a winter storm. The ship was on its way from Seville and due to the storm the oranges were already less fresh than they ought to have been. The bargain gave his wife (Janet Keiller) the opportunity to manufacture a large quantity of marmalade. In reality the Keillers adapted an existing recipe for manufacture by adding the characteristic rind suspended in the preserve. The first commercial brand of marmalade along with the world's first marmalade plant was founded in 1797.

By the late 19th century the marmalade was shipping as far afield as Australia, New Zealand, South Africa, India, and China. 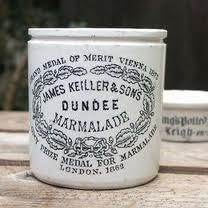 The firm was acquired by Crosse & Blackwell in 1919. It was subsequently sold on multiple times before ending up with Robertson's.

By Paul Green
Posted by Michael Behm at 10:56 AM