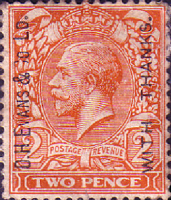 Dan Harries Evans was born in South Wales around 1856. He was apprenticed to a draper in Wales before moving to London, England, in 1878 to start up in business on his own account. He rented a small shop at 320 Oxford Street in 1879 for the sale of linen drapery and fancy goods, where he employed two assistants. As the trade grew very quickly Evans was able to lease three adjoining properties in Oxford Street by 1885.

During the latter part of 1892, Dan Harries Evans acquired the leases of shop premises at 290-294 Oxford Street, on the opposite side of Old Cavendish Street. The store was opened to the public in 1893. 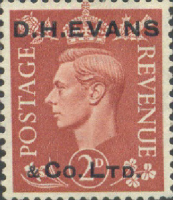 Dan Harries Evans continued to develop the business by the introduction of new lines, such as groceries, general provisions, ironmongery and glassware. This growth required a considerable capital investment and, in April 1894, Evans announced the creation of a limited liability company, D H Evans & Co Ltd. The new company had a capital of £202,000. Evans retained a majority holding and the remaining shares, offered to staff and customers, were subscribed several times over.

In January 1915, D H Evans retired from the business and was succeeded by Ernest Webb's son, William Wallace Webb. 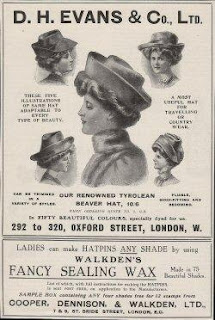 Woodman Burbidge was aware of the problems of trading in two buildings and determined to consolidate the business in a new west block. By 1935, a large island site, bounded by Oxford Street, Old Cavendish Street, Henrietta Street and Chapel Place, had been acquired and demolition of the rear portion had begun.

The building, with a 140-foot frontage on Oxford Street, was opened in February 1937. It comprised eight and one-quarter acres of selling space on eight floors, it was to cost over £600,000 and the entire sum was loaned by Harrods.

In February 1954, the entire preference share capital of the company was also acquired by Harrods and converted to ordinary shares, and D H Evans & Co Ltd became a wholly-owned subsidiary.

The store traded successfully during the following decades and, in 1987, the store was renamed House of Fraser and continued to trade under this name.

By Paul Green
Posted by Michael Behm at 3:22 AM