Wiggins, Teape & Alex. Pirie Limited was one of the oldest paper manufacturing companies in Britain.

The origins of the company can be traced to 1761 when Henry Teape established a printing company in Tower Hill, London. Edward Wiggins became a partner in the business in 1828 and so Wiggins & Teape was formed. In 1890 the company bought the Withnell Fold paper mill in Chorley and began to manufacture paper. Wiggins & Teape continued to expand, acquiring another paper mill in Devon Valley near Exeter in 1920. 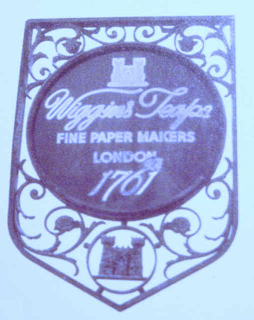 In 1922 Wiggins & Teape merged with another well established paper maker called Alexander Pirie. Alexander Pirie had been manufacturing paper since the late 18th Century in Aberdeenshire, where the company owned the Stoneywood paper mill. The amalgamation of these two old firms, now called Wiggins, Teape & Alex. Pirie Limited, set the new company on the road to expansion and the development of new paper. The company established its new headquarters at Aldgate House. In addition to letter paper the firm began to manufacture coated papers, gummed papers for stamp base, card material, abrasive base for sand paper and carton boards for food and milk containers. By 1956 the business was producing 150,000 tons of paper annually.

In 1991 Wiggins, Teape & Alex. Pirie Limited merged with Appleton Papers and then with Arjomani Piroux in 1999, creating ArjoWiggins Appleton. In 2000 a £2.2 billion takeover bid was accepted from Worms of France, forming ArjoWiggins. The company currently employs 8000 people in 35 mills around the world, with four paper mills in the UK.

Wiggins, Teape & Alex. Pirie Ltd. used their address "Aldgate House, London E.1" as the overprint on their stamps. At least three other companies who resided in the Aldgate House office building also used this overprint. The companies (also paper makers) were F. Keay & Co. Ltd., and Portals and Allied Paper Merchants Ltd. The overprints are most common on the George VI 2d stamps but are also known on SG 573. There are varieties in the style and font of the overprint. 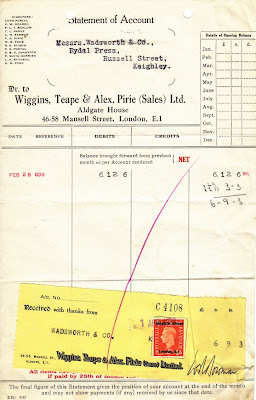 By Mark Matlach
Posted by Michael Behm at 4:50 PM