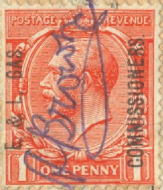 The two remaining companies continued in competition, although in 1866 they came to an arrangement to divide the area between them rather than each laying their own gas mains throughout the area.

To improve the situation, it was decided that gas manufacture and supply should be taken into what was effectively municipal ownership.

In 1889, gas production and supply was taken over by a Commission controlled by the two major local authorities in the area, Edinburgh Corporation and Leith Corporation. The Commissioners represented the two authorities, and included the Lord Provost of Edinburgh, the Provost of Leith, and a number of councilors from each authority.

The Commissioners had wide-ranging authority, including permission to buy out the existing companies, to dig up streets, carry out construction work, supply gas, sell or hire gas appliances, and so on.

The need for the Commission came to an end in 1920 when Edinburgh and Leith amalgamated and the city boundaries were extended. Gas supply and distribution was transferred to the Gas Department of Edinburgh Corporation.

By Paul Green
Posted by Michael Behm at 10:48 AM