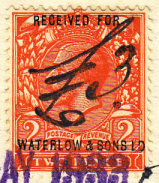 Waterlow & Sons was a major worldwide printing company and was one of Britain's largest printers of bank notes, postage stamps, and other material.

James Waterlow founded the company in 1810 in London. Waterlow adopted the idea of employing lithography and printing as a substitute for copying where a large number of copies of legal documents were required, thus effecting a saving of both time and expense. The business grew steadily in importance and Waterlow's five sons were taken into partnership.

Following the death of James Waterlow in 1876, the business was converted into a limited liability company. By the 1920s Waterlow & Sons Ltd. was one of Britain's largest printers of bank notes, postage stamps, stocks, cheques, and bond certificates. The works of the company comprised of six factories in London, one at Watford and one at Dunstable. The bulk of Waterlows' work was the designing and executing of commercial printing of every kind. Posters, catalogues, booklets, travel guides, and engraved labels were all produced in huge quantities. 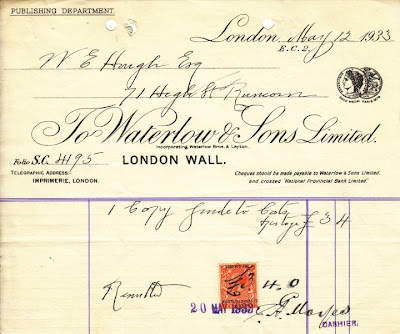 Waterlow & Sons Ltd. was acquired by Purnell & Sons Ltd. in 1960. Subsequently, Waterlows' part of the business, which printed bank notes and stamps, was sold to De La Rue & Co Ltd. Following further mergers, what remained of Waterlows became part of a new printing conglomerate called the Polester Group in 1998. Waterlows was a dormant company until it went into voluntary liquidation in 2004 and its history ends on 20th January 2009 with the dissolution of the company. The Waterlow name does, however, continue to live on as a result of specialist parts of the business having been sold over the years. 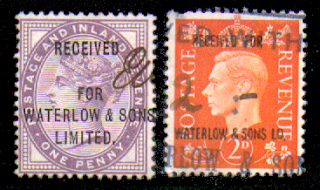 Although Waterlow and sons used commercial overprints for more than 40 years, their overprints are difficult to find.
Posted by Michael Behm at 5:29 AM