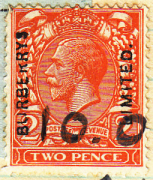 Burberry is a designer clothing and fashion accessories manufacturing company. Its distinctive tartan pattern has become one of its most widely copied trademarks. Burberry is most famous for its iconic trench coat, which was invented by the founder of the company, Thomas Burberry.

Burberry was founded in 1856 when Thomas Burberry, a former draper's assistant, opened his own store in Basingstoke, Hampshire. By 1870 the business had established itself by focusing on the development of outdoors clothing. In 1880, Burberry invented gabardine, a hardwearing, water-resistant yet breathable fabric, in which the yarn is waterproofed before weaving. By the turn of the century, Burberry offered an extensive line of outerwear for men and women. The company designed hats, jackets, pants and gaiters especially for hunting, fishing, golf, tennis, and skiing. 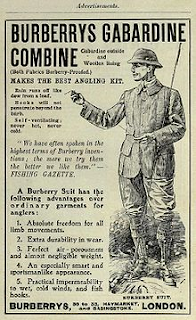 In 1914 Burberry was commissioned by the War Office to create a coat to suit the conditions of contemporary warfare. The result was the "trench coat". After the war, the trench coat became popular with civilians and in the 1920s the iconic Burbery check was created and used as lining in the coats. 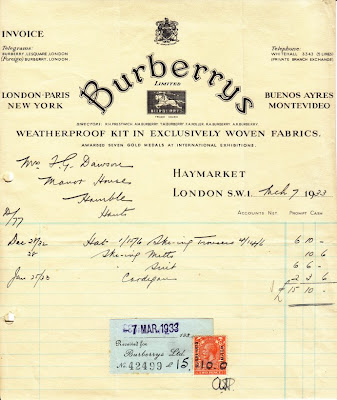 During the 1980s Burberry successfully broadened its appeal to a younger, more fashion-conscious clientele. By 2000 Burberry operated 58 company-owned stores, and its products were also found in department and speciality stores around the world.

By Mark Matlach
Burberry used commercial overprints at least as late as SG 465.
Posted by Michael Behm at 6:12 PM