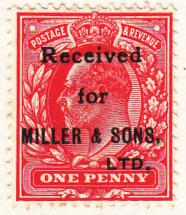 Miller and Sons were manufacturers and retailers of lamps and candles. They also imported and sold clocks and chandeliers.

The company was established by George Alexander Miller in 1851. A shop was opened at 178 Piccadilly in London's West End and separate manufacturing facilities were established nearby in Shaftesbury Avenue in the 1890s.

George Alexander's brother, Taverner Miller, had a whaling business and spermaceti refinery at Dorset Wharf by the River Thames. Spermaceti is a wax present in the head cavities of the sperm whale. Once refined it could be used to make candles. This enabled George Alexander to have an easy access to and ready supply of the wax, which he used to make high quality candles. 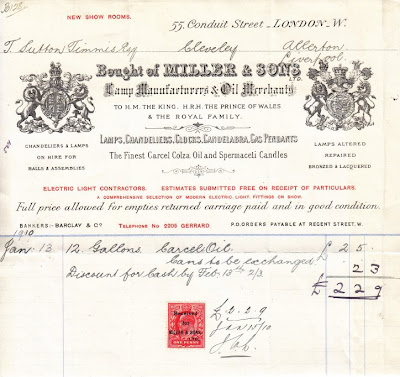 Miller and Sons stayed in Piccadilly until about 1908, when presumably their fortunes changed for the worse, and they moved to 55 Conduit Street for a few years, before finally moving to 5A Burlington Street. They stayed there until their demise in the 1940s.

By Mark Matlach
Posted by Michael Behm at 5:37 PM