The British Linen Bank was a commercial bank with its headquarters in Edinburgh.

The Bank has its roots in the creation of the British Linen Company, which was formed in 1746 by a Royal Charter from King George II. Although a Scottish organisation, the prefix "British" was used instead of "Scottish" due to the suspicion aroused by all things Scottish following the Jacobite Rebellion of 1745. The initial aim of the company was to promote the linen industry, although from the late 1760s it moved into banking and issued its first notes in 1747. The great strength of the British Linen Company was its spread of agents throughout the country, developed as a result of the company's earlier involvement in the linen trade. By 1780 there were nine branches throughout Scotland.

In 1906 the British Linen Company formally changed its name to the British Linen Bank. In 1919 it was acquired by Barclays Bank, although it retained a seperate board of directors and continued to issue its own bank notes. 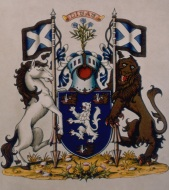 By Mark Matlach
Posted by Michael Behm at 6:04 PM