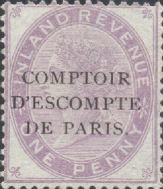 The Comptoir National Bank of Paris, or PSC, is one of four banks that became BNP Paribas. The PSC was created by decree on 7 March 1848 by the Provisional Government of the Second Republic.

In 1860, the PSC opened its first foreign agency in Shanghai. In subsequent years, new offices opened in Calcutta, Bombay, Hong Kong, and Saigon; and then London, Yokohama, and Alexandria.

1867 saw the opening of the first provincial agency in France, in Nantes, followed by Lyon and Marseille. The same year established the National Counter discount Mulhouse capital of one million francs. 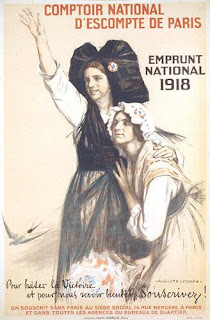 The PSC is a company with a capital of 20 million francs, made up of one third in cash by the subscribing shareholders, one third in bonds by the City of Paris, and one third in treasury bills by the state.

Comptoir d'Escompte de Paris appears to have used the C. d'E. de P. overprint in the early 1880s, then the full COMPTOIR D'ESCOMPTE DE PARIS wording at least as early as 1884. By 1899, they seem to have given up on overprints.
Posted by Michael Behm at 9:04 AM